It was 2008 when I first heard of an author by the name of Jonathan Maberry. He was appearing at a book store in Clinton, NJ and was signing his latest book in his 'pine deep' trilogy called 'Bad Moon Rising' .. the description of the first book (Ghost Road Blues) caught my attention so I bought it and read it (rather fast) before the signing; I was hooked! I must have read all three within 3 weeks. So, 1000 pages in 3 weeks... I don't have a lot of time between work and house stuff to read so this was quite an accomplishment for me.

In case you were wondering the 'pine-deep trilogy' is about a small PA town over-run by zombies (much more to it than that description but you just have to dive in and read it).

I've been a zombie fan since I can remember and like some of us zombie fans we go back to 'Night of the Living Dead' as our source for starting it all. 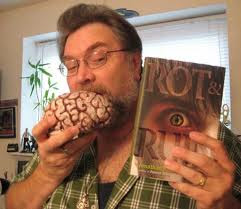 So, now years later I still look forward to the newest Jonathan Maberry novel. Last year Jonathan signed with Simon & Schuster for a 4 book deal. The first book in the series is a young adult novel called ROT & RUIN. Since there are not many (if none at all) books stores in my area I had trouble finding the book at Target or Walmart. But I never gave up looking so it only took me a matter of hours before I knew that my first NOOK (my wife got me this for Christmas) purchase would be ROT & RUIN.

The book begins some years after 'first-night' where all the dead 'turned' into zombies. The town of Mountainside is fenced in which keep 'the walkers' outside of the town. The fence runs for hundreds of miles and encircles the town. What remains outside of town is known as 'the great Rot & Ruin' ("that stretched from California, all the way to the Atlantic"). This vast expanse of zombie wilderness is guarded and what I gathered from the book is that only bounty hunters are allowed in.

The town-folk would rather go about their normal existence (sans zombies) then venture in the Rot & Ruin. They'd soon enough forget there was a 'first night' then fight zombies (who wouldn't?). The bounter hunters either live in the rot & ruin or go into the rot & ruin on a daily basis to take care of business. Family members sometimes hire the bounty hunters to track down their loved ones and to finally have 'closure'.

An incident that happens about 3/4 the way through sets up the next adventure (book). The book kind of reminded me of 'lord of the rings' in the sense that there was a quest (can't give it away) and a journey. After finishing the book you kind of wanted Benny & his friends to continue on ... which they will (in DUST & DECAY)

Any good book will leave you wanting more* and that's what Jonathan Maberry has done with mostly all his books. I can't think of a recent author who has made me feel like wanting to read the next book like Maberry does. I can only imagine what it was like when JRR Tolkien put out 'fellowship of the ring'. There must have been much anticipation for the next one to come out (4 months later), and the third book (almost a year later).

I have to say I had no idea exactly what the book was about, except zombies, but it turned out to be a wonderfully written book with purpose, adventure, action & a great conclusion (to this book). The main characters are Benny, Nix, and Tom... and a colorful assortment of bounty hunters (mainly Charlie Pink-eye and the Motor City Hammer). Charlie Pink eye is described as "six-foot, six inch albino with one blue eye and one pink one that was milky and blind" - the Motor City Hammer is described as "he was bulldog ugly and had pistol butts sticking out of every pocket..."

There are many books, movies, video games on zombies but Maberry brings it to a new exciting level. The story flows as if Maberry was there writing it down as it happened (just what makes a great novel). He makes you believe that something like this could happen or that a place like 'the great Rot & Ruin' really exists (I would hope not).

I don't know why but I liked that there was hardly any talk of government involvement and the book didn't go into great detail to explain why things happened. The book was more focused on the adventure , Tom, Benny and his friends. Since it is categorized as young-adult fiction there is just good ole' zombie killing**. I would even read this to my 7 year old .. he'd think it was cool.

So, whether you are a young adult or an old adult (like myself) you will enjoy it just the same. You will not be disappointed.

And for those of you who aren't really into the zombie thing ... You have to pick up this book, there really is nothing to be scared of... just grab your katana and sprinkle on some Cadaverine ... you will make it out alive!

*I recently read Dean Koontz's Frankenstein. While the first book was good, the second one was so-so and I have no interest in even reading the third (or maybe any book by him again).

**Since ROT & RUIN is 'young-adult' fiction the violence is toned down a little. No graphic descriptions of innards being torn out and eaten.
Posted by Papa Monkey at 11:14 AM

I Want To Go There

Papa Monkey
I was born in a little town in NJ and now I'm living in a small town in PA.. sort of in the country (far enough away from any major highways). I was in a band in the late 80s; we weren't on MTV, we didn't sign a record deal, we played 4 shows, I played the keyboard & some guitar and once got on stage and performed a Village People song with the infamous TRAP DOOR. I've been working in the same printshop for the last 22 years (yes, I live an adventurous life). Now I fill my leisure time by doing activities with my son, my wife, friends, and various family members (in good standing)... the remaining time is spent blogging, reading & talking to the cat. Most adventurous of me are the following: I have been known on occasion leave the house without pants, root for THE EAGLES and THE PHILLIES, eat cold cooked craw daddies, perform karaoke (Timmay does a mean 'mack the knife'), watch every Stephen King movie that comes out (no matter how bad), and if I'm driving and see a squirrel I WILL SPEED UP! They are evil little creatures and are not to be trusted. Remember they love nuts!